A fulacht fiadh was excavated near the north edge of the floodplain of the River Finn in Stanorlar. A sub-rectangular trough was identified beneath the burnt spread along with a number of shallow cut features. The burnt mound appears to have compressed these features as it spread out over the soft surrounding subsoil. It is possible that some of the cut features represent additional pits associated with the fulacht fiadh, such as roasting pits, however it was possible to trace the lines of a potential structure. While the preservation was poor, a possible sub-rectangular structure with projecting porch may have been associated with the trough. The trough protruded from the side of the possible structure, perhaps to allow for the hot stones to be added for the exterior. Alternatively, the posts may relate to a fenceline defining a workspace to one side of the trough.

A small quantity of burnt and unburnt bone was retrieved from the burnt spread along with a large granite grinding stone. Post-excavation analysis and radiocarbon dating is underway.

A substantial early medieval cemetery settlement site was identified to the west of Dunshaughlin in 2010. The central enclosure, including the burial ground, was preserved in situ. The remainder of the settlement was excavated in 2018 and 2019, which uncovered numerous associated ditched enclosures, a large iron production site, multiple cereal-drying kilns and a number of structures.

In the lower-lying lands to the south of the early medieval settlement a number of prehistoric features were uncovered including a cremation pyre site and cremation pit, a second possible pyre site, two fulacht fiadh sites, and two prehistoric pit clusters. 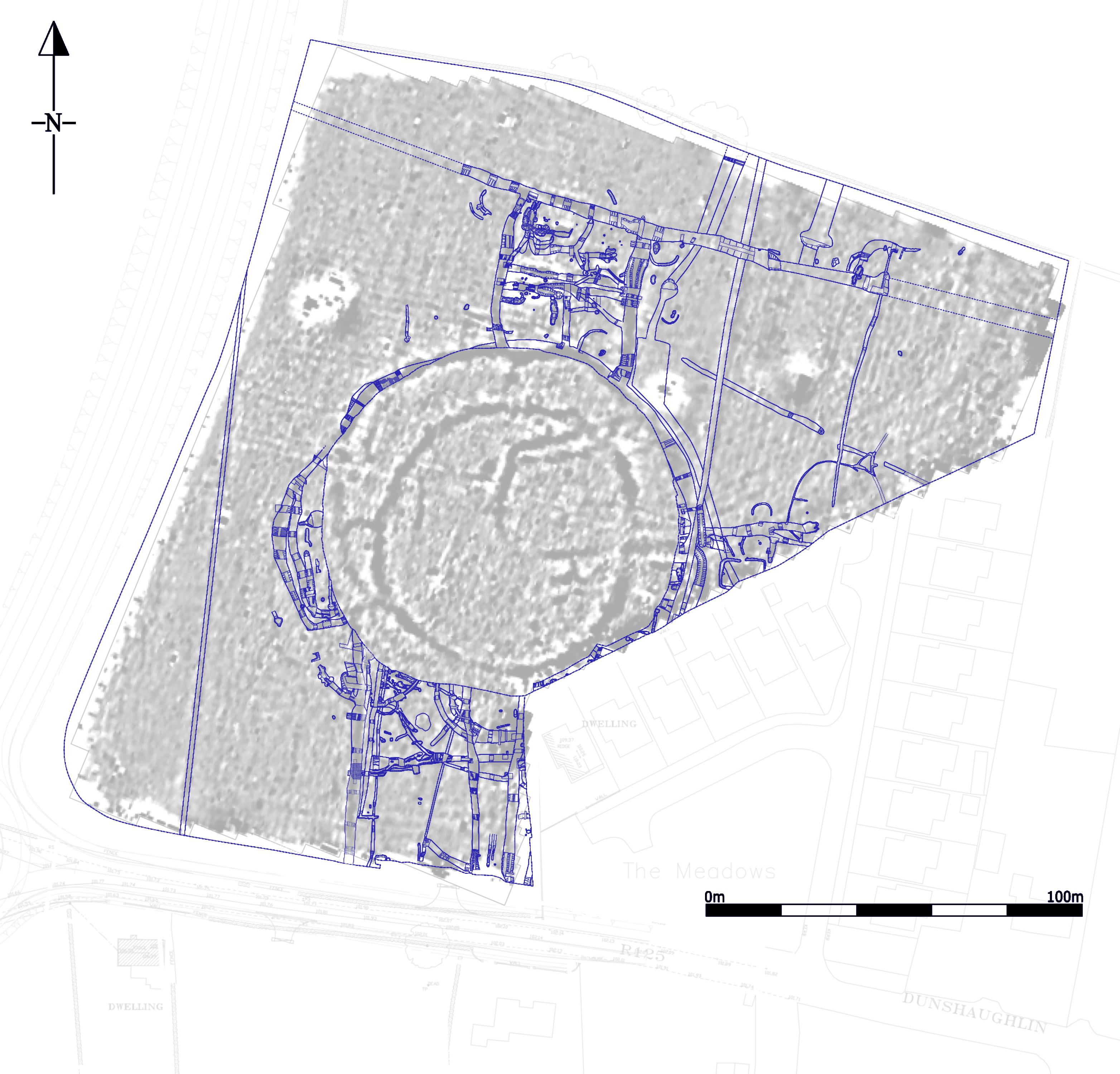 A complex fulacht fiadh site was excavated at Knockaphunta, south of Castlebar, Co. Mayo in 2016. The site was used over an extended period of time from the Middle to Late Bronze Age. A water management system was uncovered along with four troughs, which were used sequentially. 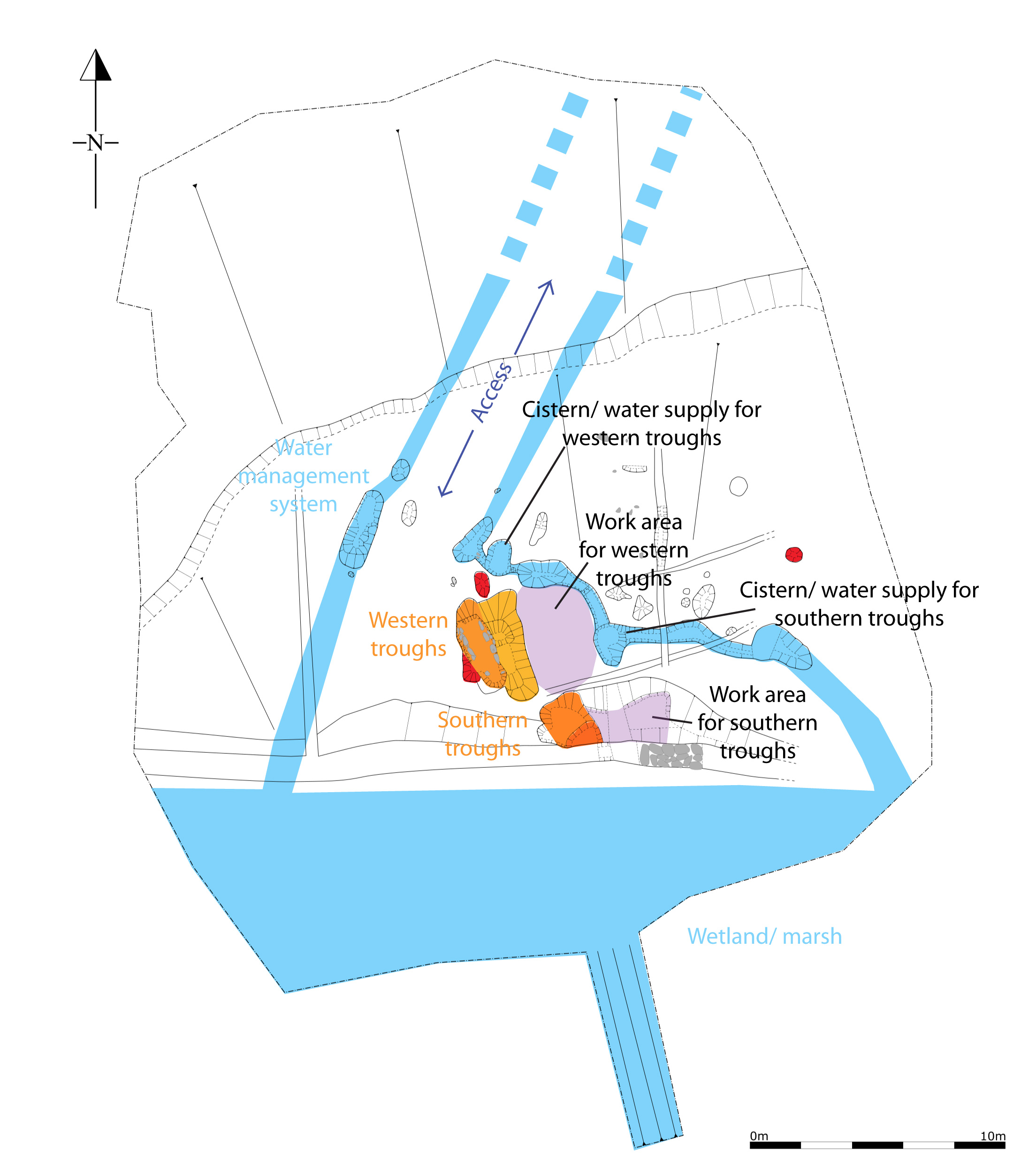 The excavation at Dundalk took place on Clanbrassil Street, Church Street, Bridge Street and Linenhall Street in Dundalk town centre. The medieval street surfaces were identified, along with medieval structures constructed of large masonry walls. One of these, in front of St Nicholas’ Church, was identified as the remains of a tower house depicted on this site on a map of the town of Dundalk in 1675. The remains of another medieval tower house, Howths Castle, was identified on Clanbrassil Street in front of the Diamond Buildings, and a medieval wooden building was excavated on Church Street. Very rich organic deposits were identified throughout the excavated areas, and contained very large amounts of animal bone and medieval pottery. The pottery is Dundalk Ware, and was particularly dense on Bridge Street not far from the location of a medieval pottery kiln excavated in 1997. A significant assemblage of late twelfth to early thirteenth century leather shoes, knife sheaths and a decorated leather scabbard was also recovered. Other artefacts included carved bone and wooden objects, metal objects, and a decorated slate inscribed with a mythical creature. High status 16th to 17th century drinking glasses were also recovered on Church Street, near the location of the tower house. 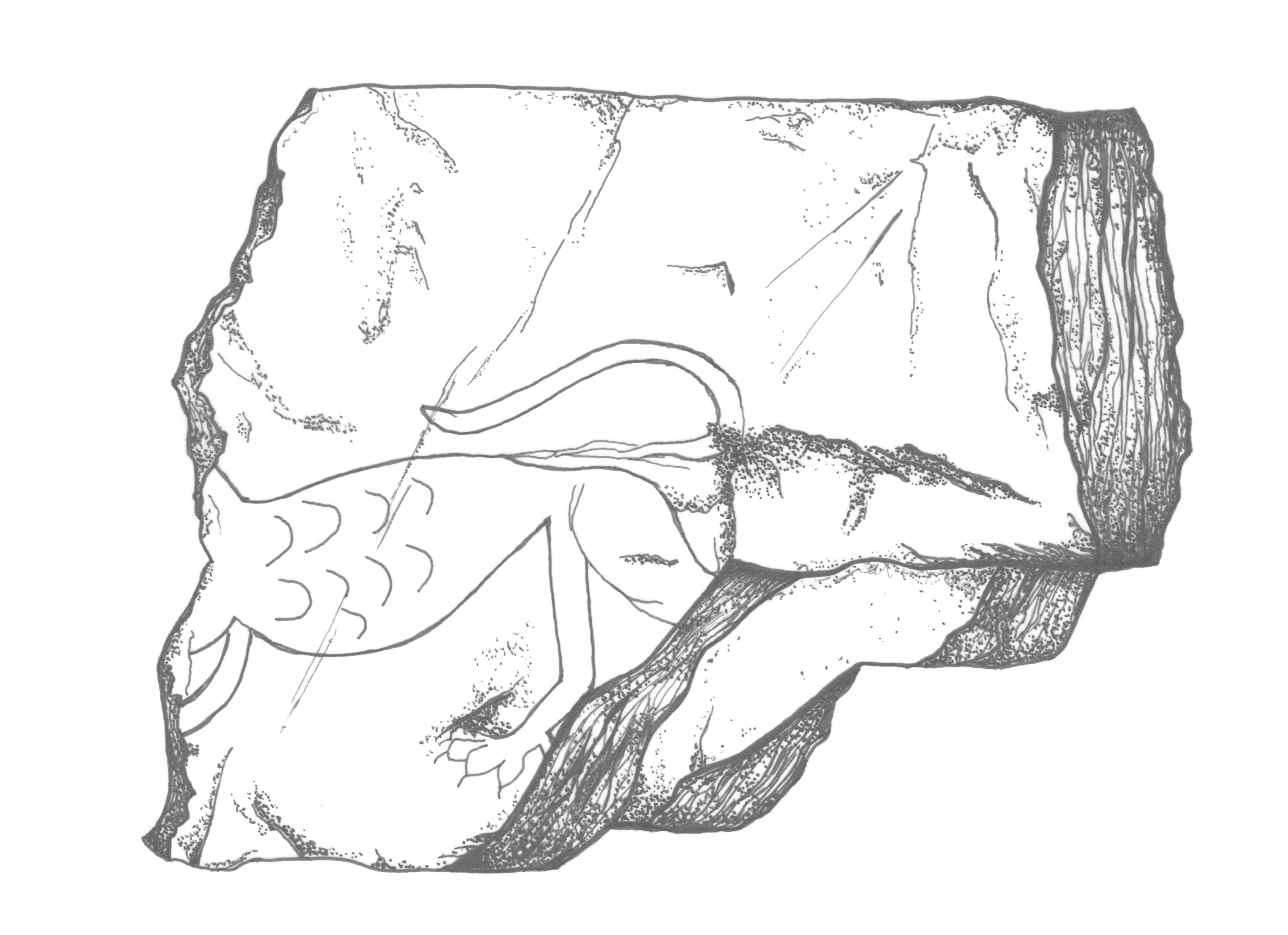 Archaeological monitoring at Clonsilla in 2019 exposed the remains of a medieval field system and a very unusual feature: rows of pits in one of the medieval fields. Each pit was identical (1.60m by 0.50m and 0.35m deep) and arranged in rows 6m apart, and the pits in each row were also spaced 6m apart, and the pits extended over an area measuring at least 80m by 50m. The pits contained few artefacts other than small sherds of medieval pottery. This report defines the finding as a pitfield, and compares it to other pitfields in Roscommon. Various possible functions for the pitfield are put forward, including that they were excavated for military or agricultural reasons.

The excavation at Clonard on the outskirts of Balbriggan, Co. Dublin uncovered an intriguing prehistoric landscape possibly informed and influenced by the wetlands located on the site and by an exceptionally early Mesolithic pathway that survived as a route through this landscape for millennia. Ceremonial and burial monuments from throughout the prehistoric period were uncovered between the pathway and the wetlands along with features associated with the exploitation of the natural resources of this environment. A pollen core of organic material from one of the wetland pools revealed a snapshot of the local environment throughout the Neolithic period.

Final report on this fascinating archaeological site at Kilgobbin, Stepaside, excavated by Steve McGlade and team from 2014-2015. The report describes a complex prehistoric landscape of wells, fields and burial, and the varied way the dead were treated.

The archaeological excavation of an early medieval settlement site evolving over a number of phases was uncovered at Alexander Reid, Navan, Co. Meath. A series of eleven kilns were uncovered associated with the various phases of the ringfort along with four structures.

During the early post-medieval period the site was reused as a burial site for a short period.

The findings are presented in two reports:

The Office of Public Works came across some unusual masonry features during conservation works at this 19th century barracks site. We conducted an archaeological assessment to discover what these were, and charted the fascinating evolution of the site and the other Military Road barracks.

The findings are presented in this report: Glencree Assessment Report

The excavation of a complex fulacht fiadh site in Knockaphunta near Castlebar, Co. Mayo.

The preliminary findings are presented in this report: Knockaphunta Castlebar Excavation Report

A fascinating multi-period site was excavated at Brighton Road in Foxrock, Dublin 18. A natural spring provided the setting for Middle and Late Bronze Age (1400 BC to 900 BC) activity in the form of wells and fulachtai fiadh. In the mid-7th century AD a large non-domestic rectangular structure was erected on the fulacht fiadh mound. It is unique in the Irish archaeological record and may have been an early Christian shrine or baptistery, dedicated perhaps to a Munster saint such as Cian. In the mid-9th century the structure was intentionally dismantled and burnt down, which may be linked to the expansion of the ecclesiastical site at Tully.

We carried out excavations at Rathfarnham Castle, a fortified house constructed in 1583 by Archbishop Adam Loftus, in 2014. An astonishing collection of 17,500 artefacts dating to the very end of the 17th century was recovered. We also carried out archaeological work in 2016 and 2017, with additional findings.

The findings are up on the Rathfarnham Castle Page.

Archaeological surveying and test trenching was carried out at the Magazine Fort, Phoenix Park, Dublin in 2015, in advance of works by the OPW for public access during the 1916-2016 centenary. Archaeological investigations revealed multiple phases of construction and repair on the fort ramparts dating from between its construction in c. 1736, and its abandonment in the mid-20th century.

The findings are presented in this report: Phoenix Park Magazine Fort Testing Report

Archaeological works along James’ Street and Thomas Street to upgrade the streetscape as part of the QBC scheme uncovered the medieval roadway and significant archaeological features around St. James’ Gate, including the remains of the late medieval gate, a possible early 12th century occupation layer outside St. James’ Church, the 17th century city defences, arefacts from a possible tilery off Crocker’s Lane, and human remains near St. Catherine’s Church.

The preliminary findings are presented in this report: James’ and Thomas Street QBC Dublin 8 Report